Do you often find yourself stuck in the post-lunch slump, desperate to get some work done? Do you often feel defeated after a long day in the library or at the office? We have the answer - and it only takes 2 seconds to change!

Like it or not, but posture does *actually* matter. Sigh.Let's go back in time, to further understand why. Some millions of years ago, our evolutionary ancestors used to sit or lie down only when they were in a safe and secure spot, so they could let their hair down, so to speak. But if they were standing up, or on the move, their attention levels were high; they had to have their guard up to protect themselves from predators.Clearly, being eaten isn't on our list of top priorities anymore. But our postural evolution has a lot to say about our current (or lack thereof) productivity levels. So how can we channel increased performance through our posture? Well, here's how...

Fight the post-lunch blues with a straight spine

The key difference between slouching and sitting up straight/standing is an increased heart rate of roughly 10 bpm. This increased blood flow could improve attention levels and reaction times. Try adjusting your posture when you have an important task that you need high concentration levels for. However, this is not a definitive cure; it often won't be as noticeable as when you're really tired, or in a bad mood. Max Vercruyssen, an ex-ergonomist, explained to Bloomberg: "To think it's going to have a major effect when you're already optimally motivated may be a disappointment."

Try being uncomfortable to tackle a difficult task

When you think about it, sitting in a comfy chair, on the sofa, or in bed is super comfortable, but compared to sitting at a desk, you probably get far less done. Vercruyssen confirms this, and explains that our bodies are more activated when we are sitting in a less comfortable chair. Makes sense, right?

But this doesn't mean you can never be comfy again. Just use this trick to your advantage, especially when faced with the most difficult task of the day. You could try standing or sitting up straight for a while as you tackle the complex task at hand. Later on, switch to a task that you could do in your sleep, and feel free to be as comfortable as possible. However, there is a distinction to be made. Mild discomfort is not the same as excruciating pain, as the latter will distract you even more from your work than slumping ever could. So don't worry, you don't need to replace your fancy ergonomic chair for a plank of wood.If you're still not convinced, try instead to give your body a break as often as you can; get up to make a drink, go to the loo, pop outside. By doing so, you give your brain a little boost of energy to help be rid of the post-lunch slump.

Slouching can make you sad :(

If you're already feeling low and despondent, the tendency is to give in to gravity and slump into a comfortable position. Yet, the very act of collapsing into yourself works to make you feel even worse. But how? Professor Erik Peper, from the department of health education at San Francisco State University, aimed to prove this. His experiment involved participants that sat in different positions and were asked to recall both negative and positive thoughts and memories. Peper explains that this shift in body positioning really does have a negative effect: "Testosterone goes down, cortisol goes up, you'll have more access to helpless and hopeless thoughts, and your brain has to do more work to bring up positive ones." 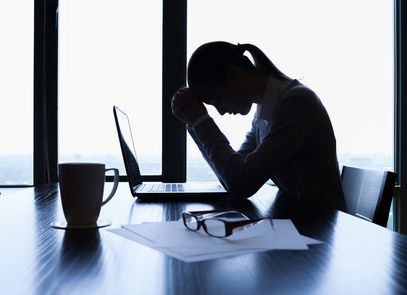 Peper calls this phenomenon the 'cowering position'; a posture often adopted by defeated animals that no longer wish to be hurt. Yet, our entire lives evolve around slouching, all due to our furniture designs. So, without even realising it, we are cowering from the world and making ourselves feel worse, just by sitting in a comfy chair; "we just feel like we've lost our drive or initiative after sitting all day," he explains.But it isn't all bad news. The same experiment showed the opposite effect to be true as well. The participants that sat up straight found it a lot easier to recall positive memories. Not only that, but 30 seconds of skipping on the spot also considerably improved energy and mood levels in participants. p.s. this article was written with a (pretty much) straight spine, and dammit, it took a lot less time than expected. 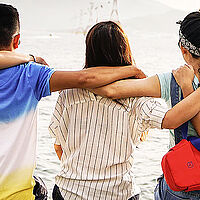